These two have their mugshots displayed with Miske Dashow

Big FuGGlY TrOlls – camping out in my apartment.

Remember these guys? Or this post? Well, they are all back and they brought their big brothers… Mr. Grammar and Mr. Style.. They woke me up at 2 AM this morning. Yelling. Howling. Snarling. Growling.

“Passive  Voice – Consider Revising!” ~ [Not expecting anything out of the ordinary, we were woken in the middle of the night by the most horrifying howling.]

“Reflexive Pronoun Use – Consider Revising!” ~  [The Bear stopped, pulled out his tinderbox and lit two torches, gave one to me, kept the other for himself, and then motioned for Cloudy Sun to place himself between us. ]

“Fragment – Consider Revising!” ~ [“Wood Dwellers?“ I asked, “Who are they?” He turned to me again, this time he smiled wryly.]

So, I am bad writer, because I use passive voice, and fragments, and adverbs and split infinitives and all kinds of things that are bad when writing. If I ever try to get anything I write published I will be shot for even thinking I could dare approach an editor with my grammatically distorted version of English.

I hate them trolls. Mostly because I believe them.

So if you’ll excuse me – I’ll just go and die with shame. 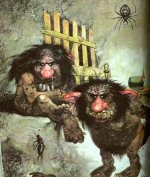 <—See those guys? They broke into my home while I slept, in broad daylight…

I am kind of hard to wake – I’ll be moving about, yes, but I will hardly be awake before at least one or two cups of coffee/tea – so imagine my surprise when I had downed my second cup and looked straight into the butt ugly mugs of the two shiny examples of Troll kind – Mr. Entitled and Mr. Procrastination. Sitting right across the kitchen table, peering at me from behind my laptop monitor. They had helped themselves to beverages from the fridge … the impudence of  Scratchy and Itchy! I swear they even brought their own flies, fleas and spiders.

What exactly did these two gentlemen want?

They very solemnly stated that they were there to help the hardworking author.

Quite simply they wanted me to ‘Take The Day Off!”, because as Mr.Entitled expressed it “I had been such a good boy and written 1800+ words on the 7th/8th”, and because, Mr. Procrastination added, “I don’t know where to go with the Story anyway…”and “I really need to do my own illustrations…”

Where is Animal Control when you need them?

Well, they almost had me. Almost. Neither of these guys passed Logics Class in school, that’s for sure. Having written a little over 200 words past the daily goal I still need to put in at least 1400 words in the coming 24 hours. That took care of Mr. Scratchy. Since I can’t draw to save my life, suggesting that I do my own illustrations is ludicrous, which I told Mr. Itchy. Oh, they are still around here somewhere, picking their noses and looking stupid.

I wish they’d walk the dog and make me coffee – that would be really helpful.